Today. Two dozen still bloom.  One Premier – Carlotta.  She has a story.  She was a bonus plant early in my daylily root days.  She was planted in our adobe dirt overwhelmed with the bluebells.  When I transplanted to pots, she was seedling size.  Today comes her first bloom.  Much better than the pictures.  She is lacy and flowing.  I like her.

Chaco Canyon – who did not bloom in 2019 until yesterday – threw an extra petal today.  I’ve not seen her do that before.  Also, worth the wait.

And, here it is, bedtime, again.

Wow, tonight I am blogging from my laptop and using my Canon photos!  Getting into the daylily season routine.  At least as much as possible when I work until 10 PM.  Fortunately, I work from home so can run out quickly and snap photos here and there.

Today, Papa Long Legs bloomed for the first time in my yard!  And, he is officially the first bloom in my Southwest named daylily garden.  I am unsure how much daddy longlegs spiders are Southwestern, really.  Although, they certainly inhabit the region.  I love the Ned Roberts (hybridizer) spider daylilies, and I am fortunate to have a whole garden where they dominate.  So, when I go through the lists of his blooms, I pick everything that reminds me of my home area.  And, honestly, I have a lot of these creatures in my yard.  Watching these ones bloom is amazing, it takes a couple hours. 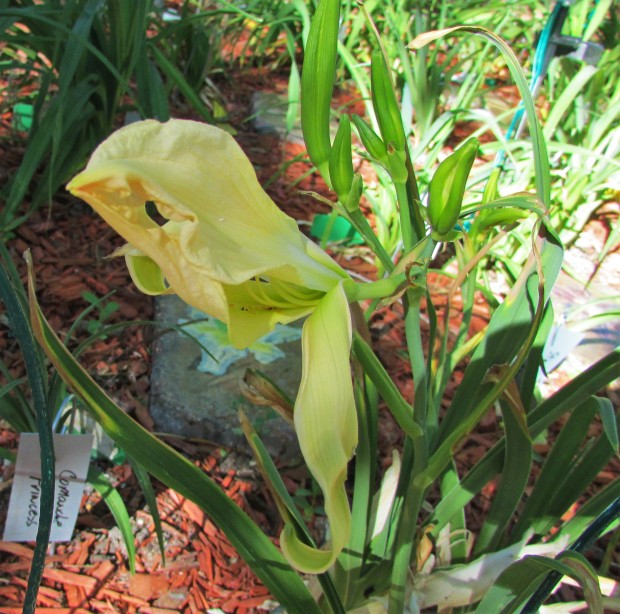 Anytime one takes a space that has been a rock garden on top of W. Colorado adobe earth, one risks.  It is hard, clay that is so basic (pH) that the nutrients lock-up in it.  Amendments help, but not for very long.  Most of my daylilies in that garden are growing, several have scapes.  A few struggle.  Why?  I seem to always find a lot of clay soil in the roots when I dig these ones up.  I also find roots of other species of plants that infiltrate everything in my mature yard.  I’m trying something new and cutting the whole bottom out of cheap pots and burying them with the strugglers inside.  And, good soil.  Hoping for some moisture retention and root guard protection.  Taking care of those who don’t flourish is the work of a true gardener.  Here on the Colorado Plateau, I have my work cut out as the nurse of the daylilies.

With the light of day, two jewels glimmered in my garden.  One is my old favorite, Ruby Spider.  Ruby is one of the oldest of my daylily collection.  I have had her close to a decade. She was added to fill a planter box that hides my drip system controls.  I used ornamental grass the first couple years, but it always died over the winter.  So, why not daylilies?  This one is still in the same planter (although divisions are now in the main garden) with Return a Smile and Just Plum Happy.  Ruby’s bloom is so big and bright that it almost looks fake to me.  I know daylily season has started when this one opens its first bloom.

The other jewel in bloom today is a new daylily called Hopi Jewel.  My thanks to Blue Ridge Daylilies for picking up my Southwest name theme and sending this as a gift plant.  It’s in with my new Ned Roberts garden, as are a select few other aptly named non-Neds.

I must be taken with Hopi Jewel, because I took a lot of photos of her.  It is a nice shape and color combination.  And, maybe it is just fun to see another new face in my new garden.  It took me days to clear the rocks, dig out some of the hard clay desert soil (we call it adobe soil), and fill it in with topsoil and compost. And, now it is home to over 50 new daylilies, mostly my Southwest named Neds.  It is nice, though, to have a few with rounder shapes.

I keep wondering if the daylilies will spread to take over or if they will stay in their current space.  The desert has the sun these guys love, but the soil is hard clay and the rain virtually non-existent.  It’s not Asia.  It’s not even Georgia, where many of these plants came from.  According to climatemps.com, Georgia gets about 5 times as much precipitation.  That’s about 25 more gallons per square foot.  One good thing about my Neds is that they were hybridized in New Mexico and Colorado.  Still, they do so much better in bagged soil and added water crystals.

I am at a clinical conference out-of-town during the day tomorrow.  I am unsure if anything else is on the verge of a bloom, but I am going to do my best to go out and check before I leave . . . sometime between 5 and 6 AM.  Unlike my lilies, I do not bloom that early!